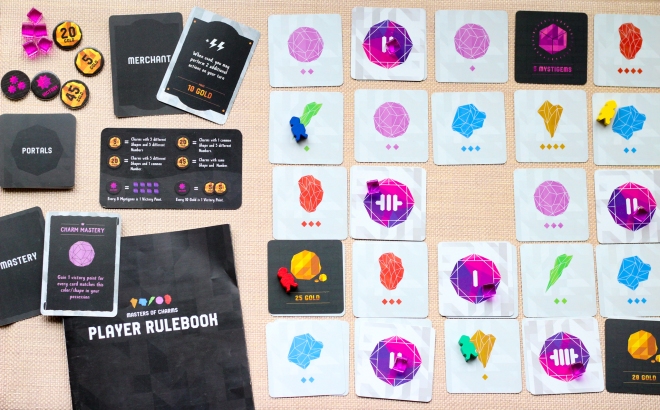 This is a great laid-back game that uses a puzzle-like strategy to collect Lode cards on a 5×5 grid filled with crystals, ores, and other gemstones to sell and gain gold for victory points (VP) at the end of the game. 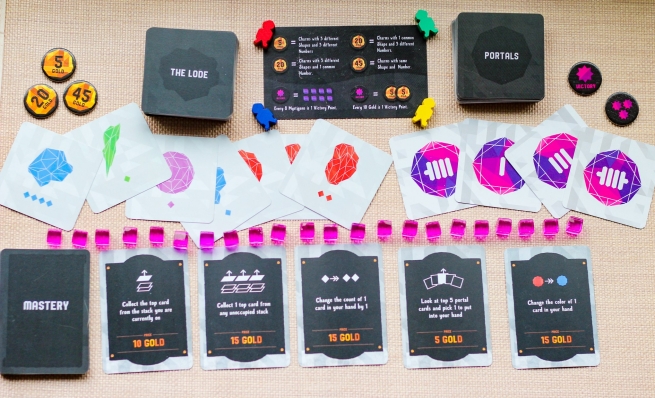 Each player can only have seven cards in their hand, so managing your hand in both selling and moving is an important balance. Merchant cards help you along the way, and each player has a Mastery card to give them an extra challenge to collect points at the end of the game. The end of the game triggers when a player cannot perform at least one of their two actions in their turn. So, let the race begin! Players need to move around the grid as quickly as their actions allow, collecting cards and selling as many sets as possible.

I played this game twice, both with 4p. The first time was with my family, including two teens and their mom. They do not play many boardgames, but they enjoyed it and picked it up quickly. The second time I played with my husband and two other young adult friends. They are usual boardgamers, and really got into the strategic-side of things. Both times I played were great, because the first was more laid-back and the second was more like a challenging strategic card game.

A player can only start moving around the grid by placing a Portal card where their Gnome is, along with a  “Mystigem,” or a purple cube. The Portal cards have 1-4 strength on them, indicating how many times a Gnome can move forward. If a Portal card has a drift mark on it, the Gnome can turn 90 degrees on the grid. After moving, the player can pick up the gemstone card that they landed on, adding it to their collection. However, if the player lands on another Portal card, they collect the Mystigem that was on it and discards that portal card, moving that number of times on that new card. This keeps on happening until they land on a Lode card.

Portal hopping to create long, strategic moves in just one action brings a unique aspect to this game. If you can do it right, you can keep on landing on one Portal card after another, removing all the Mystigems you can. Eight Mystigems equal one VP, so collecting them in one action can really make or break a game. When you finally land on a Lode card with a gemstone, you take the gemstone there and your action ends. However, each player has TWO actions per turn–and some pretty strategic combos can arise because of this. 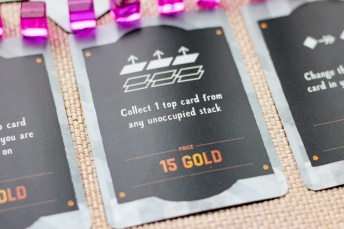 The 5×5 grid of cards has three cards in each spot, except for the very middle where there is the “void.” No one can hop over or pass the void. Once a stack of three cards runs out, that spot also becomes a void. This makes the end of the game challenging, especially since portal cards can only turn if directed on the card. This is where Merchant cards come into play. Merchant cards can be very expensive, costing a player their precious gold (10 gold equals one VP). However, a Merchant card can grant you duplicate portal cards, gemstones, exchanges, and more. Our group found Merchant cards to be worth it if they allowed us to finish one of our charm sets.

Charms. You can get more gold depending on your combos:

From our experience, most people were getting 20 Gold per set for Charisma and Wisdom Charms. A few people created some Master Charms, and only one person created a Luck Charm.

This game is now out on Kickstarter here, and I’ll be a sure backer. The game design is great, it is easy to teach, and offers a strategic but fun game to play with my family and friends. I know that I can play this game over and over and have a different outcome each time due to the layout. Have you played this game yet? What do you think? What was your top score? Let me know in the comments!